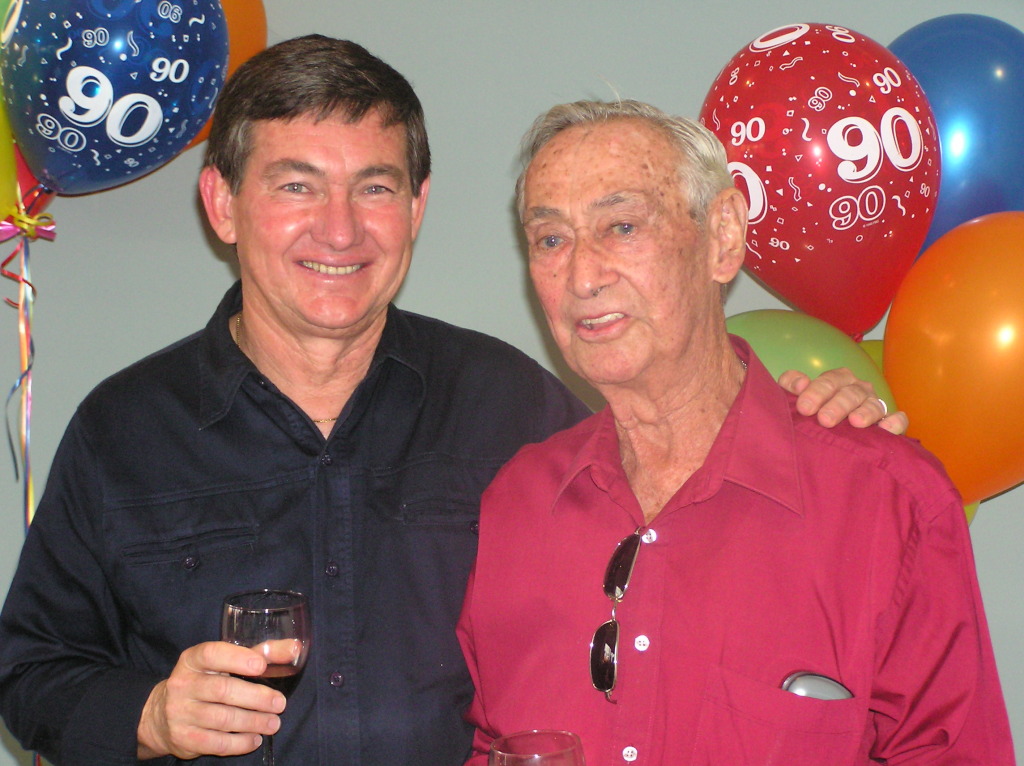 I’M GOING to say from the outset that Johnny Cash never met Wally Foreman, to ensure that the headline on this post doesn’t mislead people. However, it does refer to the amazing help I received recently.

I noticed that the last update I gave you on dad’s biography was more than two months ago and a bit has happened in between then and now.

The sad news is that we lost grandad, who passed away just shy of his 99th birthday. The family got together yesterday, Sunday 19 October, to celebrate what would have been that milestone.

As I write this, I’m listening back to the series of interviews I did with him in 2012 for the book. This project has been extremely challenging and draining for many reasons, but it’s been rewarding equally so for others and the interviews with grandad will be one of those rewarding moments that I treasure forever.

Not everyone is lucky enough to interview their 97-year-old (at the time) grandad, let alone have his voice, memories and idiosyncrasies on tape.

The reason I’m listening to those recordings now, though, is because the writing has started, albeit after a crisis of confidence.

I set about this project like I set about writing an article, because that’s all I’ve known when writing anything close to a biography.

That meant ploughing through interview after interview, with the goal of knocking them all off before I begin putting the story together. That’s what I would do as a journalist because it was no use trying to write a story when I didn’t have all the information.

I also knew the very last interview I did could change the entire book.

The plan held me in good stead in terms of achieving progress and I evolved my processes along the way, but there was still that nagging concern: with no basis for comparison, how did I know what I was doing was what I should be doing?

My favourite biography is Johnny Cash: The Life, by former LA Times music editor and best seller Robert Hilburn. I love the structure of it, the way every chapter begins and ends in the same way – urging the reader to read more – and, of course, I love the subject, with a love for Johnny Cash one of the few passions dad and I shared.

One night, about two months ago, I had a sudden and desperate crisis of confidence.

The clock was ticking. It kept ticking. It always ticks. It ticks to the point that, if one doesn’t have a plan for what they want to achieve, they will be plagued by anxiety, because every silence in between ticks feels like it needs to be filled with action. Not for a particular purpose, but, quite the opposite; because a purpose is lacking.

That’s how I was feeling; I had been doing all this work, all these interviews, but I didn’t know if I was any closer to actually starting the book, let alone finishing it.

So, I contacted Robert.

I wonder what he thought when he opened my first email: some random reader from a place called Perth, which is probably one of the farthest places from LA possible and also probably one of the least-known cities in Australia, had contacted him asking for help with a project on a man he knew nothing about, but who was apparently important.

Robert was amazing and, despite all that, I get the sense he did his own brief online research on dad to know who he was talking about and he was then kind enough to talk me through some advice over several lengthy correspondence.

It was immensely helpful and reassuring to hear that a lot of what he suggested, I was doing already. However, there were some key suggestions that I’ve since adopted. The main one was, “Start writing!”

And so I have.

There’s probably 80 or so interviews done, with 40 or so more to come, but the first chapter is completed. Chapter 2 is a biggie. It’s currently titled “The Boy From Bruce Rock” and there’s no prizes for what it focuses on.

The chat with Robert also gave me a firmer plan of how I hope to utilise the next 12 months, which brings me back to the interviews with grandad.

They were the first I did for this project, because, once I’d decided to write The Legend From Bruce Rock, I immediately thought that, as healthy as grandad seemed in 2012, he was still 97-years-old. He held on for a further two years, but unfortunately will never read the result.

As this post closes, I’ve just finished transcribing the second lengthy chat we had and, so, I’ll leave you with one of his more resonating comments.

“I think there’s something inside a boy and a man that pulls him up at the last moment. If he listens to that voice, or that instinct, there’s nothing wrong with him. If he doesn’t listen to it, he’s going to go off the straight and narrow.”
– Eric Foreman, July 2012

Thanks again for following the project.