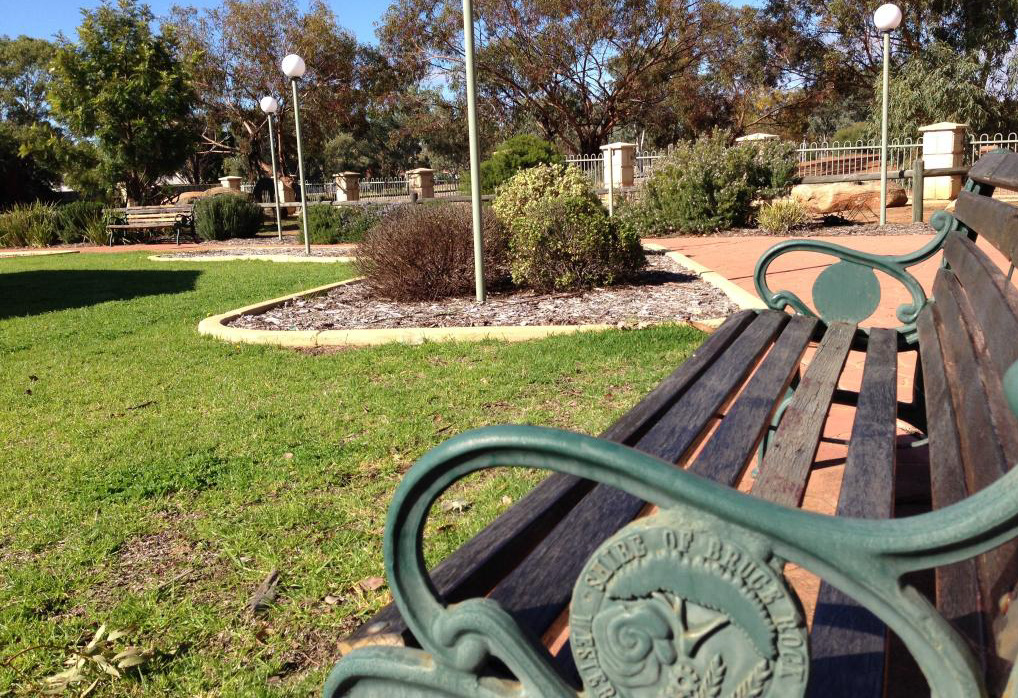 I WALKED back into the Bruce Rock Clubroom, about five minutes after bidding farewell to some of dad’s childhood friends, because one of them phoned saying he forgot to show me a picture hanging on the wall.

The picture was a massive, 10m wide panoramic shot of Johnson Street – the main drag of Bruce Rock – from the 1960s; around the time dad and the family were there. And perched at the end of the street was dad’s old family house. It was an amazing look back in time.

Then, another mate approached.

“You’re just like your bloody dad; you never leave the place,” he said.

“Next thing you know, you’ll tell us you’ve driven four hours to sit on a park bench for an hour, spoken to no-one and turned around and driven back again.”

The humour of the comment was in the truth of it.

Dad’s friends told me he had got all nostalgic one day, driven up to Bruce Rock – which is no drive around the block – and, unable to find any of his childhood friends, had sat on a park bench for an hour, before driving home.

“It was the one weekend I’d gone away. I came back home and found a note written in pipe on the ground outside my house saying, ‘Wally was here’,” said Bo Williams, another of dad’s friends from school in the 1950s.

Humorous, but poignant. And it got me thinking.

Why do we get nostalgic? I’m sure we’ve all had pangs of the emotion at times and I find they get stronger and more frequent the older I get.

And, more specifically, why was Bruce Rock so important to dad? Yeah, sure, it was home to his childhood and when people reminisce and feel nostalgic, I’m sure childhood is a main thought for most. But I mean specifically for dad.

What memories did Bruce Rock hold for that were so strong they drew him on a 10 hour sojourn?

Because, in terms of the biography, those are the key questions that need to found one of the opening chapters. Not the boring dates and facts; no, I want the rainbows and lollipops.

I want to close my eyes and see, feel and hear the secrets of 1950 that Bruce Rock still holds.

So, I did. And, on a Sunday, as my wife, daughter and I prepared to leave town after being there for research and interviews for the book, I did what dad did; I found a bench and I sat on it by myself for an hour.

It couldn’t be just any bench. That wouldn’t have been what dad did and I needed to see and feel what he felt.

For example; the stone picnic table at the end of Johnson Street wouldn’t do, despite it being across the road from the family home and overlooking the formerly-vacant-block-now-abandoned-BP where the neighbourhood children, including dad, used to play.

It was too new. There wasn’t enough history.

In the centre of Bruce Rock is a gazebo, near the community amphitheatre. Around its borders sit half a dozen weathered seats; traditional park benches, with commemorative plaques.

All were candidates. One stood out.

On it are two plaques, dedicated to, and donated by, the Teasdale and Boyanich families.

The amphitheatre precinct is relatively new, but to the right of this seat, beyond an aluminium gate, is a vacant block of land. Beyond it is the train line. Behind it is the Post Office, established in 1928. Not much more of the drastically changed main strip can be seen, hidden behind the trees and bushes that confine the area.

A kelpie barks in the distance, a ute tray rattles as it negotiates a gravel road and there’s a gentle whitewash of static as a car in the distance drives the dead-straight road from Bruce Rock to Merredin. There’s birds chirping and a warm, winter sun bathes the town from its place in a royal blue sky.

And there’s very little else.

Forty-something years after he left Bruce Rock, this little sanctuary, new as it was, was holding pieces of dad’s 1950.

There were thoughts. More importantly, there was time for thoughts. Time for thinking.

It was peaceful, calming, beautiful and – contradictory as it may sound – fun. It was everything everyone says they’re working towards – by doing the opposite.

It was a place to think about the farms – like those ones beyond the train line – that threw eight-year-olds their first driving lesson, out of necessity for working on the land.

It was a place to think about a grandma – a mother – who passed away a decade ago, but who would once play the organ at mass as the family joined many of the town at church every Sunday.

Why do we get nostalgic?

Because it’s that mixed sense of understanding, appreciation and loss. The older we get, the more we understand what we didn’t appreciate at the time and have now lost.

Dad drove four hours to sit on a bench – maybe the one I sat on, maybe another one – in this particular town, because it held pieces of a past that had such warm memories. A past that held people he had lost.

Bruce Rock was a little piece of dad’s Heaven on Earth. A pocket in time that was six decades old, that he lived in for 10 years.

And that only took four hours to get to.