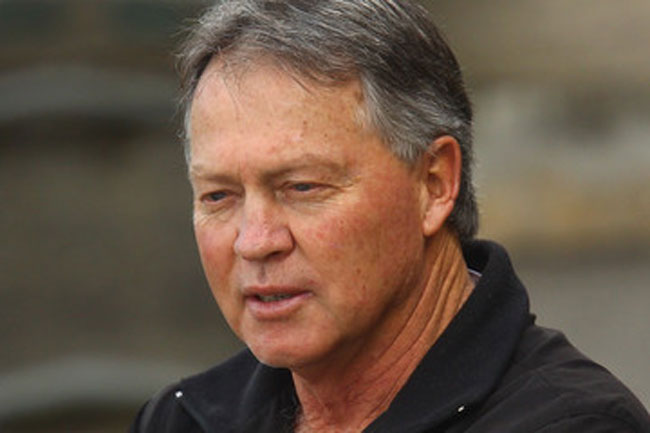 FATHERS, they put up with a lot, don’t they. And they probably deserve that day they get.

In all honesty, I’m not quite sure how I feel about Fathers Day anymore. Maybe, once I have kids of my own, it’ll take on a new meaning. But, for those of us who have lost their dads, it feels a bit hollow.

Sometimes all the advertising and over-the-top TV promos for Target and anyone else trying to make a buck, just gets a bit much for me and, I admit, I even get angry.

Nonsensical thoughts start flying around; “Oh, Fathers’ Day, really? I don’t have a dad, so go f-ck yourself”.

Then, I calm down, and normal broadcasting resumes. And I realise that this is not a day for me or my thoughts, it’s a day for dads and to celebrate them.

It’s a day to remember running into my parents’ bedroom as a kid when he wasn’t well and asking, “Do you want me to get you a B-B-Berocca-B-B?”, confusing name with slogan, but lifting his spirits with a laugh, regardless.

It’s a day to remember sitting in the car on a Sunday, staring out the windscreen at a footy oval as hail pounded everything around us, and dad saying, “We can stay here, where it’s warm, or you can go out there and help your mates, because they’re waiting for you”.

It’s a day to remember dad’s inability to record a TV show using a VCR – God help him if he was around for DVDs – and his refusal to embrace technology. A time to remember when my mobile phone flashed with the words, “Dad Mobile”, and I answered with a question, not a statement: “Dad?”

And the latter got me thinking. Without a doubt, the immediate values that dad treasured most were; family, friends and humour.

It made me think of the family holidays that we would take every year, that I regrettably ended as a teenager who had better things to do, but that took the rest of the family from Yallingup to Coral Bay and over to America.

And it was the roots of those holidays that brought back memories of our trips to Smith’s Beach, Canal Rocks Beach Resort, with Bryan, Steph and the Cousins clan.

So, as The Legend From Bruce Rock chugs along, I thought I’d share a story from someone who remembers those days as fondly as I; former Perth and Geelong footballer, Bryan Cousins.

“Going down south, those were always fun times,” Cousins said.

“We were at a winery one time and a beautiful country family was having a lunch for their parents – they were probably in their 80s – and their children were there.

“We were a little but ruckus, but they’d recognised us to some extent and kept looking over, but weren’t quite sure.

“Later in the day, when Wally and I were half cut, Wally went to the toilet and, as he came back, he started talking to the people at the table. One of them said, ‘Oh, look, we’ve been watching you and you’re Ben Cousin’s dad, aren’t you?’

“Wal said, ‘Yeah, that’s right’, and then he’s proceeded to tell them how he taught Ben everything he knew, talking as if he was me, but making me sound as if I was a complete and utter wanker.

“I couldn’t think of anything else, so I actually said, ‘Yeah, well I’m Wally Foreman and I’m a dickhead’.

“So I then sat down and joined the table and said, ‘You know, you must hear me commentate – I’m the best commentator going around’, but after a while, I said to Wal, ‘You know what, we’re not doing ourselves any favours here, we’re making both of us look like complete wankers’.

“We sat there for about an hour with these people and, when they left, I remember one of the guys came back and said, ‘It’d be great if you could give mum and dad a cheerio on the radio’. And, of course, Wally later did.

“But just after they left, this carton of merlot rocks up at our table, which they’d given to us and we promptly demolished.

“I remember one time, your dad got (journalist) Peter Sweeney to call up Steph, pretending to be from Canal Rocks, and say, ‘Look, we’re really sorry Mrs Cousins, but we’ve double-booked, but we’ve got a very elaborate tent for you’.

“Poor Steph is trying to be polite and angry at the same time, so I’ve come home and she’s said, ‘You’re not going to believe what happened, but they’ve double booked and we’re down in tentland’.

“I said, ‘Are you sure about that?!’, and I don’t remember how it played out, but in the end, we found out your dad had put Sweens up to it.

“Those were funny times and your dad was always getting injured.

“He broke his toe one time, because, we’d all come down the night before, but he’d had to stay up in Perth to call the footy.

“So he’s come down, almost in pitch blackness, and next thing you know, he’s kicked his foot and you’d have thought the ambulance needed to be called.

“The whole holiday he hobbled around.

“Then there was the year when, well, no-one was there, but he said these two kids saved his life.

“He went body surfing and – you know your dad, he can never tell any story without it being humorous – but, he caught this one wave and got slam-dunked into the bottom onto a whole bunch of rocks.

“He said, the first thing he remembered were these two kids who pulled him out and said, ‘Geez mate, that was the wipeout of the week!'”

Those were good times. Not so much the concussion for dad; I remember laughing and thinking it was a joke – I would have only been about 10 – before mum pulled me aside and explained the seriousness of it and that dad could have died.

It just added to the drama of the memories and I remember them well.

I was recently down that way for a wedding and my wife and I took the opportunity to drive past Canal Rocks Beach Resort. Well, what’s left of it.

It’s now a fully-fledged resort. The tennis courts and grass that I remember are gone, replaced by concrete driveways, a café and more units to bring in more money.

Tentland seemed gone – I might be wrong about that, but I couldn’t see it – and replaced by units to, again, bring in more money.

The uniqueness had gone and been replaced by a generic resort. Everything that made that place special had gone.

God, as sad as it was to compare that concrete jungle to the paradise of my memories, it almost seems fitting with the loss of dad. A completely selfish, self-focused poetic justice, if you will.

But it was a feeling of nostalgia that wasn’t limited to me.

I remember kicking the footy with Ben and Matt. I remember surfing with them, well, “teabagging”, as they called it, because dad, Bryan and I bodyboarded, “dangling in water all day”, while they surfed. We were all out there at Injidup Point, occasionally swapping surfboard for sandboard.

Peaceful times, with the calm of the horizon holding no sign of the future that was rolling in for all of us.

“You know, you have these times in your life – I do, anyway – where you sit there and reminisce,” Cousins said.

“Those are the weeks that I think about.”