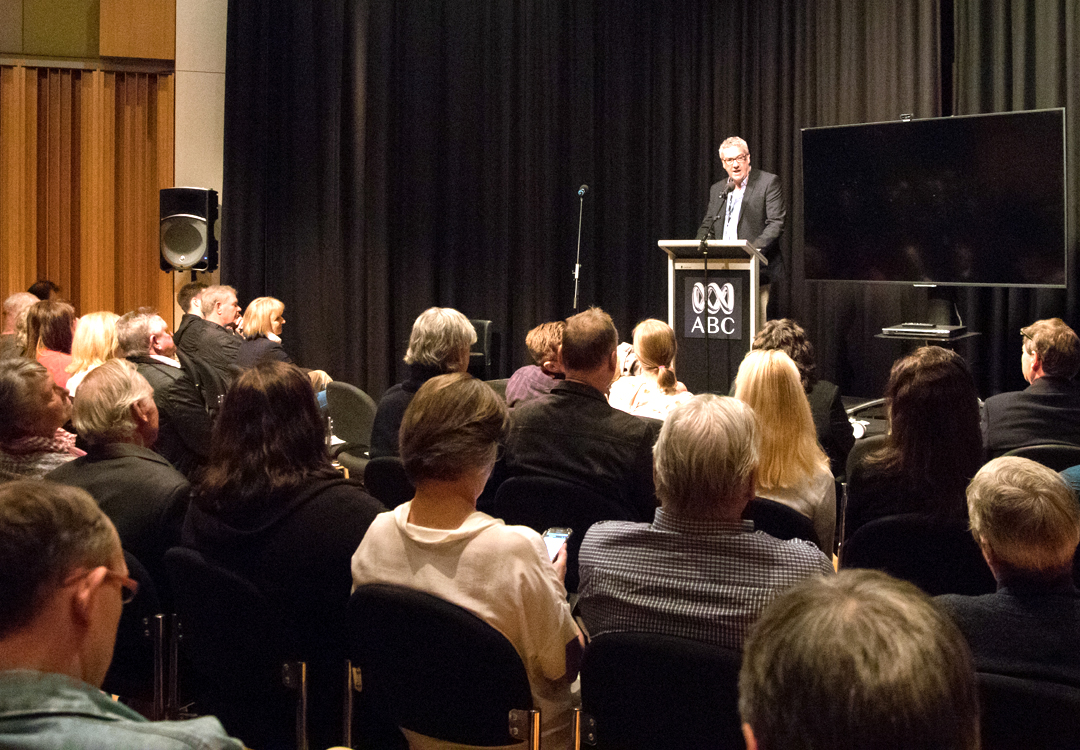 THE Legend from Bruce Rock: The Wally Foreman Story was officially launched on the weekend, taking flight from ABC Radio Perth’s East Perth studios amidst great fervor and fanfare.

A crowd made up of some of Perth’s biggest media and sports identities, such as Dennis Cometti and Brad Hogg, were joined by others not as well known to the spotlight, but tremendously close to Wally Foreman, his wife Lyn and the Foreman family.

The day opened with a live broadcast of ABC Radio Perth’s Sports Talk program from the event, with host Clint Wheeldon and panelists Mark Duffield and Shane Woewodin interviewing Glen Foreman and Bryan Cousins, as well as replaying some of Wally Foreman’s more memorable on-air follies, before the formalities of the launch began.

Host Geoff Hutchison detailed the serendipitous intertwining of his and Wally Foreman’s careers, which began with the former completing work experience as a Kalamunda High School Student with the latter at the ABC during the 1970s, before weaving into the NINE Network and reuniting at the national broadcaster in 2006 – just months before Foreman’s heart attack.

In an emotional address, Langer, who works closely alongside Glen Foreman at the WACA and had received an early copy of the book, spelled out the five reasons why he loved the book: “I love the author”, he kindly noted of his WACA colleague; the subject of the story, Wally Foreman, who Langer admired and shared time with in their athlete-broadcaster roles; the fact it detailed an important chapter of Western Australia’s history, a home state for which Langer is exceptionally passionate; the micro-locations of Perth, WA’s regional towns, which rekindled many memories for the cricketing legend; and, finally, family.

“Family is the most important thing to me and this book is all about family,” Langer said.

“It’s written by a son, to a daughter, about a father – beautiful.”

A courageous and candid Bryan Cousins discussed his love of the Wally Foreman he knew: a man who could be hysterically funny – often at his own expense – at the same time as being stoic in his support of friends during challenging times.

Cousins detailed the confidential and often work-conflicting support Wally Foreman poured upon his family during the early days of his son Ben’s battle with drug addiction.

And the former VFL star had the crowd in laughs, as he detailed the way in which Wally Foreman used to use his position on-air to have the last laugh over mates.

“I’d thought I’d got Wal really good at this event and I was pretty pleased with myself, but then he said to me, ‘How many people do you think are in this room?’,” Cousins said.

“I said I thought there was a couple of hundred. Then he leaned in and asked how many I thought would be listening to Sports Talk the next day, before telling me to make sure I was listening.”

The event attracted significant media attention, with reports appearing on both Channel SEVEN and NINE Network news bulletins, as well as coverage in the following day’s The Sunday Times.

The public response to the launch of The Legend from Bruce Rock has been overwhelming, with several retailers across metropolitan and regional WA reporting sell-outs, before restocking and selling out again.

The launch excitement continues this weekend with the official regional event in Albany.

Please see Where to Buy for a list of retailers FFPress is aware are stocking The Legend from Bruce Rock.